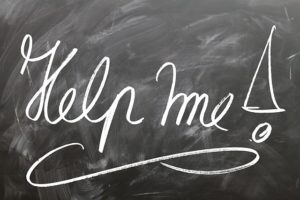 I taught my class at the library this week – ©The Writer’s Shed: Everyone Has a Story.

The night before, I woke up mid-dream, and mid-excuse with a top ten list of why I wouldn’t be able to teach in the morning. Here it is:

1) Couldn’t sleep
2) Too tired
3) Too terrified
4) What if no one shows?
5) What if everyone shows?
6) What if I talk too much?
7) What if I don’t talk enough?
8) What if someone asks me something I don’t know?
9) What do I know? ‘Cause the more I learn, the less I think I know.
10) What if someone leaves in the middle of it? Will I chase them? Will I tackle them; wrestle them to the ground, drag them back inside and bang a book over their head?

Or, will I just leave with them?

Clearly, I dream irrationally, using subconscious logic to persuade myself into believing that what I perceive as an imminent threat is as real to me as the danger itself, which probably doesn’t speak well for my conscious logic.

“What’s the worst that can happen?” I thought, “As I Lay Dying” by James Faulkner.

Can I be arrested for overdue books?

Assaulting someone in a library?

(Mental Note: Regardless of due dates, return all library books and donate all personal books for good karma credit.)

Then I found the best book on writing that I’ve ever been given, Ann LaMott’s, “bird by bird.”

I flipped it open to a page I had dog-eared – page nineteen.

“Thirty years ago,” she writes, “[her] older brother, who was ten years old at the time, was trying to get a report on birds written that he’d had three months to write. It was due the next day. [They] were out at their family cabin in Bolinas, and he was at the kitchen table close to tears, surrounded by binder paper and pencils and unopened books on birds, immobilized by the hugeness of the task ahead. Then [her] father sat down beside him, put his around [her] brother’s shoulder, and said, “bird by bird, buddy. Just take it bird by bird.””

I’ll take it bird by bird, and word by word.

And that’s what I’ll tell my students to do too.

But I sensed an old familiar feeling creeping into my body, or maybe more accurately I hope – it was creeping out.

Either way, I felt slightly paralyzed with Fear.

Disguised as a Saboteur, it settled quietly and comfortably in the commonplaces of my body – the way it used to in the past.

The more I resist it, the more it surges and swells inside of me.

I tried to calm the storm that was brewing, repeating my new mantra: “bird by bird, word by word,” but it was too late.

My fear, no matter how irrational, can still overcome me physically, but where I used to succumb to it completely, I embrace it now – even after it makes me physically sick.

Fear will never get the best of me; not anymore.

Splashing cold water on my face and chewing on a wad of spearmint “Chicklets,” I started repeating LaMott’s mantra again, “bird by bird, bird by bird,” and then…

…”Bird by bird, word by word, one foot in front of the other.”

I showed up to teach my class because my students were going to be showing up for me.

I wish I could tell you that it was an awesome experience, but if I tell you that, I might have to admit that I like teaching and I have sworn up and down until Tuesday, that I would never, ever teach.

Listening to their stories.

And realizing that no matter where our stories begin, they all lead us back home – to the heart.

Those are the stories that move us, inspire us, change us, and connect us.

Everyone has a story. Who’s going to tell yours?

…Cheers to “Chicklets,” devoted teachers, sharing stories of the heart, and finding a little bit of humor in our day.