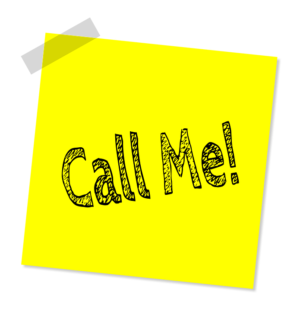 Since I’m about to get fired by my kids, I decided to start interviewing for a job. (Am I About To Get Fired?)

And last week, I had my first, real live person-to-person interview since having a professional career more than fifteen years ago.

Although I did some research – and a few drive-bys before the day of reckoning, I wasn’t as nervous as I thought I’d be, and considering the number of e-mails it took to nail down an interview with this guy, I could have been. He was very emphatic about me parking on the North side of the street and using the West door.

“Remember, park North, use West door,” he said in his final e-mail confirmation, but I live in a very small town. Not only is parking never an issue, the West door is only three steps from the North lot, and while I never realized this small, one-story, nondescript building ever existed, I’ve driven by it countless times.

I also realized that I can run to it from my house in the time it takes to run a mile at a chat-with-a-friend pace, so it’d be a great commute, but other than telling you I spent over an hour interviewing with someone who looked like a cardboard cutout, I’d be hard pressed to give you any details about the job except that it was offered.

I can tell you that his office is half the size of the entire first floor and it has a single-paned window that overlooks a cluster of cubicles, and a few women who multi-task in them. (He likes hiring women because they’re good at multi-tasking, he said.)

He is also adept at swiveling in his chair without any other body parts moving – except, that is, for his mouth and one hand. Its like someone helped him into a full body cast that morning and propped him up into a sitting position for optimal swiveling because he was working one hand through his salt-and-pepper coif quite a bit. I must confess, I am a little jealous of his hair.

As he continued to talk and I realized it might be a data entry job, my eyes started to glaze over. I began debating if he looked less like a cardboard cutout and more like the marbleized frozen roast sitting upright in my freezer; I’ve been reluctant to thaw it and cook it because every time I open my freezer I get grossed out, like it’s staring at me – yelling at me: “What, I’m not dead enough for you?” (This is the side of animals I don’t like at all, so I always slam the freezer door on it!)

Anyway, a lovely woman, who’s only been working for this guy a short time, briefly interrupted, which was a bit of a relief until I found myself awkwardly following her around the office of mostly empty cubicles, like a puppy dog. I continued this training exercise until we sat at her desk where she began teaching me more about data entry.

I didn’t have the heart to tell her that I’d rather pass a kidney stone than take the job, but she seemed to be doing some on-the-job training herself, so I looked for the nearest exit sign – which was over the West door next to the North parking lot – and waited for the right time to gracefully escape.

After leaving, I promptly followed up with a thank you note and respectfully declined the quasi-offer, but Frozen Roast was not taking no for an answer, e-mailing separately several times. He must have been trying to swivel and type at the same time because it was in some sort of short-hand code: “Understand,” “If change?” “Too many hours?”

My answers were: No, no, and no, until my friend called to ask how it went.

She told me I should e-mail back.

“It’s the professional thing to do,” she said. I thought I was very professional. He was the one who never got up out of that swivel chair – ever – not even when I shook his hand hello or goodbye. (And now I’m starting to feel bad; what if he didn’t have any legs? Ugh.)

But I value my friend’s opinion, and she offered it twice, so I took it under serious advisement. Then I prayed she would never ever ask me about it again in this lifetime.

She did – the very next day.

I told her the truth and the truth was: I don’t like to burn bridges, and it’s always good to reach out and meet new people because I never know what the universe has in store for me, but this was not the job for me, and the only thing I could think after meeting this guy was – that’s an hour and a half of my life that I’ll never get back.

I need to protect my time and my energy better and stop worrying so much about having loose ends in my life, so here’s what I did.

I laughed at myself instead and thought: Here’s to loose ends and all the guys who never called me back.

…Cheers to meeting new people, finding humor in your day, and laughing at the absurdities!

12 Responses to “Call Me Maybe”