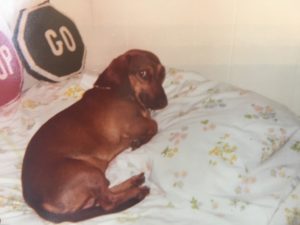 One of my chores growing up was walking our dog, Otis.

Like most chores, however, my mom picked up the slack and offered me a deal.

“I’ll walk Otis in rain, sleet and snow, if you walk with me and Otis whenever it’s sunny and warm.”

That was a no brainer:

I knew my mom wanted my company, but still, I wiggled my way out of walking every chance I could, until one day she came in the front door and collapsed on the couch.

Otis was lively and pulling my mom heartily by the leash, but Otis was a daschund – a black and tan, hot-dog-of-a-dog with stubby little paws and a hernia scar that ran the length of his belly.

He was about as tall as my ankles were high and couldn’t have weighed much more than twenty pounds, but my mom, who could still wrestle me playfully to the ground and run me ragged on a tennis court, was shaking and trembling.

I still think she may have been crying before she came inside.

But she wasn’t fine.

Otis caught sight of a squirrel on their walk and decided abruptly to chase after it, which wouldn’t have been so bad if my mom hadn’t still been attached to the leash, or, if the squirrel had been running up anyone else’s tree on anyone else’s lawn.

It was the one house, the one lawn, the one neighbor my mom warned me to steer clear of. I didn’t know why, but I was happy to heed her warning – mostly.

I passed this particular house almost every day on my way to play basketball and the man who lived there always gave me the heebie-jeebies.

And the stink eye.

And, he was always cutting his lawn.

I didn’t always play basketball at the same time, but it didn’t seem to matter.

Aside from cutting his lawn, I don’t think he did anything else.

It was beautiful – no doubt about that, but it seemed weird to me that his lawn was the only lawn that never had any dandelions in it.

All the other yards had dandelions – little baby sunflowers – so I decided they were too scared to grow in his yard.

Why else was he the only one whose lawn never had any – ever!

A man without dandelions should never be trusted.

Especially, if he owns a gun.

My mom was shaken that day because scary-creepy-neighbor-guy threatened her with a gun, telling her if she or our dog ever stepped foot on his lawn again, he’d shoot our dog and have her arrested for trespassing.

I didn’t want to lose my mom, or my dog. I couldn’t live without her – or without Otis, frankly.

If the man with the gun could keep dandelions from pushing their way through the earth, he was capable of anything.

It was sunny and warm and I had broken my promise to walk the dog with her.

I would have been there to protect her, if I had kept my word.

So I asked my mom to forgive me.

She didn’t think I could ever do anything that would require her forgiveness, but said if I ever thought I needed it, I should know that I would always have it – whether she was there to say it or not.

My mom asked me to pray for the neighbor that day.

I couldn’t believe it.

She hadn’t even left the couch!

“He threatened to shoot Otis and have you thrown in jail!”

“We all need forgiveness,” she said softly.

“Why should we forgive him? He’ll never be sorry, Mom!”

“Maybe not, but carrying a grudge against him won’t make him any sorrier and it’ll end up hurting us even more.”

“All he cares about is his stupid yard!” I bellowed.

“Maybe making his yard beautiful makes him feel good. Maybe his wife died and he tries to make it beautiful to honor her memory.”

“I don’t know his reasons for doing it and I probably never will,” she said.

“But we still need to pray for him and be willing to forgive him because when someone’s that angry, it’s not about you, it’s about them.”

“Somewhere inside he’s holding onto hurt, so we need to pray for his hurt – and for ours, so the hurts have a chance to heal.”

That made no sense!

But neither did magic, and I believed in that so I prayed with my Mom by rote, unaware that someday this paradoxical prayer would return to set me free.

With one hand cupped inside of my Mom’s, and the other hand still holding Otis by the leash so he wouldn’t move while I used him as a foot rest, I slouched on the couch and prayed with my mom in order to forgive someone else’s offense.

I didn’t realize the significance of praying for those who “trespass against us,” but it’s a prayer that I still use today, in times of need.

We prayed for the willingness to forgive our neighbor that day.

For God to work in his life, the same way that He was working in ours.

And we prayed that our neighbor’s yard would bring as much happiness to his heart as it did to ours, whenever we walked by.

And then we prayed to always remain open and willing to choose forgiveness and love, instead of revenge and hate.

It didn’t stop me from dumping a pocket full of acorns on his stupid lawn whenever I walked Otis at night.

I still feel a tiny bit guilty about that, but maybe he knew it was me and maybe he forgave me too.

Forgiving is a conscious choice and an act of freedom.

It doesn’t mean my hurt is wrong, or that it doesn’t matter.

It matters so much; it’s the very reason why pain runs deep.

It can break your heart.

Forgiving doesn’t mean I deserve what I get either.

It’s just a spiritual tool that helps to unhook the pain.

If I can unhook it, I can release it.

If I can release it, I can accept it and let it go completely.

That is what sets me free.

It really is magic.

But it’s a decision – to act in the solution instead of the problem.

So I try to practice forgiveness every day, over and over for the least of offenses because my slight irritability and impatience can hold me hostage to bitterness and resentment in the blink of an eye.

There will always be assholes in our lives and unkind people.

They come disguised in all shapes and sizes and they live in every city, in every town, in every community, and on every block.

They work in your office, they shop at your store, and they attend your church.

They are us at times.

We can never know what’s going on behind closed doors, but we can be the door that opens for someone and the person who lets that someone in when they knock.

Cheers – to choosing forgiveness, and to forgiving others in the same way that we need to forgive ourselves.

28 Responses to “How Do You Forgive A Complete Ass?”