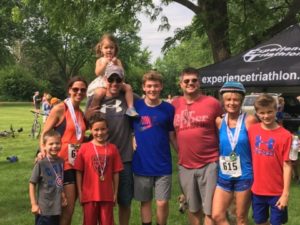 I had just finished the bike event of a Duathlon with a flat tire, which I continued riding on for several miles, until the inner tube in the back tire got caught in the axle and the wheel locked up completely.

So I did the next best thing, with an unridable bike in the middle of a Duathlon;

I walked with it.

I didn’t even know it had an axle.

Surely, someone would be by to get us; a nice volunteer with a van?

And Don’t Call Me Shirley

I had seen one volunteer on the bike course with a notepad of some sort; sketching maybe?

I wasn’t paying close attention, but she was there; I rang my bike bell at her when she passed – which might explain the six minute penalty I got at the end, but it was a beautiful day to be doing just about anything outside.

So what if I had to walk into the wind next to my flat-tired bicycle for several miles.

Even forgetting to take off my bike helmet for the last running event was fun, mostly because my helmet’s designed to look like a scary shark face and fin.

What’s not fun, even in a cool, scary shark helmet, is running along side your bike.

That’s what I did for however many miles I had left to finish the bike course, after a policeman, who could see me walking it in the distance called for an event vehicle to pick me up.

But I couldn’t do it.

I couldn’t wait for it to arrive.

I couldn’t tell my kids that I had almost done my best and they would ask, because sooner or later, kids always quote their mothers.

So I thanked the policeman for his personal water bottle and went to help my heap of scrap metal and spokes up off the ground.

“When the rescue vehicle gets here,” I said, “tell them I challenged them to beating me to the bike transition.”

“Nah, Nah. I’ll show them,” I smiled, carrying my bike away as if it were a feather; “Fuckers,” I laughed, half-crying, half-running with a bike in my arms.

Now I had to finish.

“Sorry, Bike, I’m trying to look dignified here, but sometimes I need to redirect my frustration, so act aluminum.”

Then, like a dog with no hind legs who’s hooked up to a wagon in order to walk, I was off, alternating my bike from one side of my body to the torture.

Surrendering One Step At A Time

Running into the transition area, I dropped my broken bike, forgot to remove my helmet, and took off running to the last event course.

There were still runners on it;

So I made a deal with myself.

“Catch one runner at a time; then quit.”

Before I knew it, I caught two and was facing the back of the third.

Aside from sporadic patches of wild flowers and crooked tree branches that boughed gracefully over our heads, the only thing separating us was a Momma duck and her ducklings waddling across our path.

They were headed for the Fox River, probably unaware of how it got its name, but it gave me a good reason to stop momentarily and feel perversely happy about fate.

I let them cross and watched, as they plummeted into the water.

I envied them bouncing onto the top of it, gliding contently downstream with the current.

If only I could glide contently on the backs of ducks; bouncing and gliding and going with the flow to the end of wherever life’s currents lead me.

It felt like a good time to give up.

Or drown myself in the Fox River.

So I started praying.

Immersing myself into the pain; I prayed.

I prayed to let go and surrender to something greater than myself.

To rise up and over and above the physical pain and mental anguish.

I prayed for the strength to embrace it, and endure.

For faith and healing, and for other people who suffer more than me everyday.

And I was reminded of the greatest thing of all:

God Comes To Me Through Other People.

The third runner turned his head unexpectedly, and gazed back at me.

He smiled and uttered something inaudible.

I’ll sweep you off your feet and carry you to the finish line?

It’s frustrating when you can’t hear.

Even more so, when beads of sweat are dripping down your forward and into your eyes so you can’t see.

So I prayed that he would slow down.

And I prayed for clarity.

Because I couldn’t read his leg.

That’s what my life came down to on this beautiful day.

Like cattle, we had been marked by age on the back of our leg with a permanent, black Sharpie.

“Ive got your number,” I muttered; pushing forward, trying to see it:

Kerby, who showed up in this race when I needed someone the most, was eighty-two.

This was his two-hundred and seventy-sixth Triathlon.

“I’ve been waiting for you,” he said.

“I’ve been waiting for you too,” I smiled.

I synced into rhythm and found my pace in his.

“Okay.” I committed, watching ducks glide past me – up stream!

I imagined feasting on foie gras for dinner.

Eyes On The Prize

I saw my kids at the finish line as I crossed and when I looked into their eyes, I knew I had done my best.

That my best was good enough.

I don’t do these ridiculous endur-a-thons to beat anyone, although – I did place third in my age division last year, but if you do them long enough, you’re bound to place, just like Kerby did.

He got first in his age division!

I, on the other hand, did not get first in mine.

I was dead last over all, after a six minute penalty for drafting on my bike, which seems ironic, given that Shirley was drafting on her notepad in the middle of the bike event.

I should have been given a handicap, but dead last today feels like a personal best.

I do these endur-a-thons to challenge myself.

Reminding me that small goals and small victories and fighting through to the finish line, is what matters.

Hopefully, my kids will understand that someday.

When mind over matter is breaking their spirit.

When what matters, will require their best thinking.

I want them to know that their best will always be good enough, even if they’re dead last.

There will always be someone faster and stronger and slower and weaker, but it doesn’t make them any better or any worse.

It makes them different.

It makes me different.

Which is always a matter for the heart.

It will meet you wherever you are.

And so will other people.

When you least expect it.

When you need it the most.

And you’re about to give up.

Someone will be there to help you through because we all want the same thing in the end.

We All Want To Know We Matter.

And sometimes putting your heart into it is the only thing you can do.

The only thing left to do.

So here’s to putting your heart into whatever it is that’s holding you back from life; from living.

From knowing that you’re not alone.

From knowing that you matter.

It’s beautiful day – for just about everything.

Until next next time,