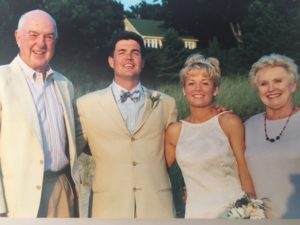 The temperature in the hotel room was seventy degrees.

A little cool for me, but I had on my lovely flannel pajamas and matching winter hat, plus, I turned up the thermostat a couple notches when my husband, Andy, and my two boys, Danny and Mark, left for the pool.

It was late, but after a thirteen hour drive caravanning with kids, cousins, and in-laws from Illinois to Virginia, I just wanted to sleep.

So I hugged my pillow and prayed to fall asleep before everyone returned from the pool smelling like chlorine.

That’s when I heard the clickety-clack of the key-card and the jiggle of the door handle several times.

“Are Andy and the boys fighting over who gets to use the key-card, or is it not working?” I wondered.

Hand over hand over hand, it sounded like the Three Stooges were breaking into my hotel room.

Bursting through the door, they tumbled over the threshold and raced to see who could get into bed first.

“Have an apple,” Dad whispered.

“Have an apple or a banana,” Dad whispered, again.

Then, as if it were life or death: “Daaad, I’m reallllly, REALLLLLY hung…”

But before Danny could finish his hunger cry, or Andy had a chance to show off his saint-like patience, I piped in where I shouldn’t have.

“It’s 11:30! If you’re hungry, eat an apple,” I half-howled. “If you’re reallllly, REALLLLLY hungry, we gotta whole bowl of ’em–so, eat an apple–eat the whole bowl if ya want too, but GO TO SLEEP, PULEEZE!”

Be careful what you wish for.

Then he ate a second apple.

And then, he started in on a third apple and I thought:

And with every bite of every apple, the crunching in my head got louder.

So loud, I thought I was eating an apple, but I was just grinding my teeth.

And guess what Danny did with the apple cores?

In our dark hotel room, his Kobe-like shot from the bed dropped into the trash bucket next to the desk.

But it didn’t end there.

He started eating a fourth apple.

“Dan, you are NOT eating a fourth apple, are you?!”

We laid in the dark.

The silence was deafening.

I knew I needed to apologize for my rotten behavior.

Part of me wanted to laugh at the absurdity, but I felt more like crying.

So we shed some tears.

We had caravanned to Virginia to attend a memorial service for Andy’s step-dad, Duncan.

“He was a man who always gave all of us his best,” I thought.

So I prayed a little prayer to Duncan that night and promised to give him mine.

How Lucky We Are…

My brother-in-law, Bob, said as he began the eulogy the next day.

Not only did Bob’s eloquent remarks capture Duncan’s optimism and generous spirit, they reminded us how lucky we were to have Duncan in our lives for so long.

But the most poignant moment (for me) came when Bob, who shares with Duncan the distinction of being a Master Gardener, talked about Duncan’s legacy.

In the musical Hamilton, Bob recalled, Lin-Manuel Miranda answers his own question about legacy.

“Legacy is planting seeds in a garden that you never get to see.”

“Duncan, who had immeasurable talents and even more admirable virtues has graduated to become an Ascended Master Gardener,” Bob said, “but the garden he leaves behind for all of us to see is his greatest work of art.”

To being inspired by the fabulous men in our lives. Men who are sturdy and strong, gentle, respectful, and kind.

Men who lead and listen and follow and fail, but continue showing up because giving up is never an option.

Men who learn how to right their wrongs and forgive with their hearts.

Men who love–and men who are even more lovable because they know it’s okay to be vulnerable.

So here’s to planting and growing, toiling and tilling and turning our lives over to the care of something greater than ourselves.

We’re all connected in the Garden of Us.

And it’s a masterpiece.

Until we meet again, Dunc. Thanks for growing our hearts bigger.

And thanks to my mother-in-law, Barb, whose love continues to connect, protect, and sustain us all.

Barb was able to snuggle with Duncan during the last few hours of his life and then she said:

“I left for a cup of coffee and when I came back, he was gone.” 22 Responses to “A Masterpiece In The Garden Of Us”