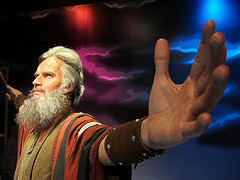 Have you ever been star-struck?

After living in Los Angeles for many years, I got used to working with celebrities, but before that I was just a young, inexperienced college intern knocking on the dressing room door of an Academy Award winning actor.

Known for portraying larger-than-life roles like Moses and Ben Hur, Charlton Heston was performing in the internationally acclaimed stage production of The Caine Mutiny Court Martial at the John F. Kennedy Center in Washington, D.C.

But I had access and a backstage pass and moved through the catacombs of The Kennedy Center like Batman.

More importantly, my Mom loved Heston, my Aunt went to Northwestern’s Theatre school with him, and I thought he’d appreciate my popping in to say hi on their behalf, so I knocked.

On his dressing room door.

“Mr. Heston?” I squeaked as I poked my head through his dressing room door.

“I’m Mo and I’m an intern and I just wanted to say hi. My Mom and my Aunt are huuuuuuuuge fans.”

It was eerily silent and equally awkward.

I had goo-goo-gaa-gaa stars in my eyes and stood like a deer in the headlights.

This man-deity with a jutting-jaw, searing blue-eyes and a booming baritone voice, who was seated on his couch and still taller than me, stared at me for what seemed like an eternity.

After calmly channeling his inner-Moses, he said:

“I’m not sure who you are or where you came from, but you need to go back there. I’m on in less than thirty minutes.”

As my eyes popped out of my head and my heart fell to my feet, I backed out of a door that I was barely in to begin with and said:

I was too naive to understand the implications of my bad timing before knocking on Heston’s door.

When I saw him after that night’s opening show, he curled a finger at me and motioned for me to come to him.

Like a magnet, I was pulled into his orbit.

Mesmerized by his see-through-me-eyes and paralyzed by his God-like persona, I couldn’t stop myself.

Trance like, I kept moving ever so closely to him, imagining an unimaginable ending for myself.

I couldn’t resist his allure, but did manage to run a lightning-speed exit strategy through my brain.

If he starts channeling his Moses again and smashing me over the head with some stone tablets, I will hurl myself onto the Kennedy Center’s Eisenhower stage and channel my best sacrificial little lamb.

“What is your mother’s name” he asked, firmly pressing his incredibly large hand onto my shoulder.

Oh my gosh, he’s going to call my mother! I thought.

Taking the Playbill out of my hand and a pen out of his pocket, he smiled.

What should I call her?

And then he signed my Playbill:

“Jean, your daughter has to work on her timing, but she’s a nice kid.” ~ Charlton Heston

He was an epic film hero and an Academy Award winning movie star.

Women adored him and men wanted to be him, but he made me feel like the Queen of the Kennedy Center.

And, a hero to my mom when I gave her that autographed Playbill!!!!!

Someone said the other day that it’s nice to be important, but it’s more important to be nice.

“Each time a man stands up for an idea, or acts to improve the lot of others, or strikes out against injustice, he sends forth a tiny ripple of hope.”

Here’s to the importance of being nice today and to the ripple effects of hope in our future.

Please feel free to share any of your life’s most embarrassing moments.

12 Responses to “Timing Your Exodus”