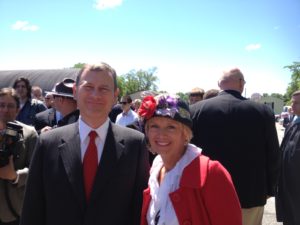 In all the years I worked in Hollywood, I never once asked for an autograph.

The first time I do?

Roberts graduated from my high school alma mater and was giving the commencement speech there one day, and my fourth grade son, at the time, had prepared a Power Point presentation about him that he wanted Roberts to sign.

Mom, will you get Chief Justice Roberts’s autograph on my presentation when we see him on Saturday?

You bet I will! I blurted.

I couldn’t say no to that. I didn’t want to lose face.

But my body broke out into a cold sweat and my heart started pounding.

It was a hard ticket to get–even as an alum.

I regress when I go back to my high school, too.

Worse, when I’m nervous, I giggle and say stupid things, things I can never take back.

Things I try to convince myself that I only said in my head.

So when the highest judge in the land finished delivering the commencement speech and I got my one chance, I gave him a firm hand shake that triggered this:

Hi, Mo Vear. This is my Llama Mater, too.

I’m pretty sure I said ‘Llama Mater’ to the highest judge in the land.

But I’m getting ahead of myself.

There was the question of how to address him.

I hadn’t thought that through.

Is it Your Honor?

There wasn’t much time.

I had to decide.

After he finished speaking, he was escorted outside to a receiving line.

I had to seize the moment–or be seized.

Roberts’s security detail was closing in, getting ready to whisk him away.

One guy, who looked like a mall cop named “Chuck,” started talking into his cufflink–as if I wouldn’t notice. (Please, I grew up on Get Smart.)

He wasn’t going to stop me from getting the autograph I needed for my son. 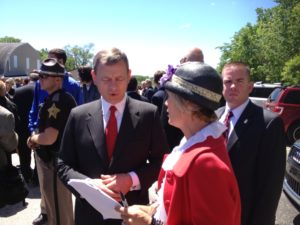 But Chuck was close to another guy–a bigger guy with guns–the bicep kind and the kill ’em kind. (Guns of any kind scare me, especially when bullets are near by.)

So I kept one eye trained on Chuck–as I’m sure he had both of his eyes trained on me–and focused on getting my autograph.

Then, I made my move.

After telling the Chief Justice we shared the same Llama Mater, I just kept talking, leaving him to wonder perhaps:

Did she just say, ‘Llama Mater,’ or have I been sitting the bench too long?

To make matters worse, I think I followed it up with the wonderful:

Has anyone ever called you, Chief of the Supremes?

Yep! It just rolled off my tongue, as if I was merely stating the obvious which, of course, is in the interest of serving justice.

Why didn’t I stop at Llama Mater?

Because I’m an idiot.

I quickly showed him my son’s Power Point presentation and whipped out a Sharpie for him to sign it–waiting ’til later to use my back as a table top so he could but, then, he did something unexpected.

He started reading it.

Every page–asking me questions about my son. 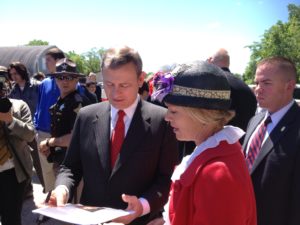 It wasn’t a legal brief, but I could feel Security Chuck’s laser-ray eyes burning into my kid’s paper; he seemed antsy.

But I felt compelled to answer the Chief’s questions–of all people.

He had been so gracious, so I told him the truth:

My son wants to be president someday and frankly, he thinks your signature might help with that. Ya know, like an endorsement.

I also think he wants to impress his teacher at school, I mumbled, out of the corner of my mouth.

The Chief Justice smiled and said it was his pleasure to sign my son’s report and that he wished him the best of luck on his future presidential run, but that I might want to talk him out of it.

I told the Chief Justice–since he’s in the business of fairness–that he might want to talk my son out of it because my son doesn’t really listen to me.

I thanked him for his time and his words of wisdom and then gave Chuck a knowing nod, as if to say:

At least I didn’t ask the Chief Justice for his John Hancock.

It was on my mind, but I exercised restraint.

I swear, under penalty of perjury.

The Things We Do For Our Kids

I’m paraphrasing, but Chief Justice Roberts gave two tips to the graduates that day that I will always remember and that I will now, always remind my kids to remember, too, no matter where they are on their journeys in life:

When you get to college, take the time to say hello or good morning to everyone you pass.

You’ll be remembered as the friendly new guy or new girl, and that’s not a bad reputation to have, nor is it a bad thing to be.

Secondly, give your faith a chance.

For the first four weeks, go to church or your corresponding place of faith.

At a time when things are changing quickly, how you respond can affect your future indeterminably, so have a familiar time and place to reflect.

Letting Yourself Be Seen

I contemplate good intentions and value other people’s time, but I don’t always have the best timing or the perfect words.

I’ve assumed–mostly, that people will forgive and forget my missteps because mostly, I have always felt forgettable.

Loving my kids more than I love myself is the antidote to that.

Loving them forces me to be seen and to forget about feeling forgettable–mostly.

I try to trust the process.

So, here’s to small steps.

To reaching out with a warm hello and a smile to the people we pass every day, because that is always a good way to be.

And to making eye contact with them because in this way, we’re practicing letting ourselves be seen.

And, here’s to giving ourselves a familiar time and place every day, to quietly reflect on how we’ve done and how we can do better tomorrow.

Today is all we have, so make the best of the rest of it–even if you misstep; it’s okay.

Cheers–to loving someone more than you love yourself and to letting yourself be seen.