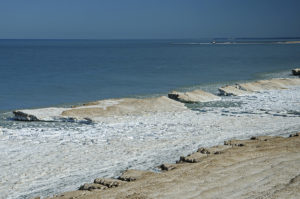 Have you ever seen the television movie, Rudolph The Red-Nosed Reindeer?

I hate when Rudolph gets ousted from the reindeer games and I hurt for the misfit toys and Hermey the Elf who feels like an outcast.

Mostly, I ache for the Abominable Snowman; the huge, white, furry beast with long, pointy-fangs and a hairless face who’s so cold, his face, hands, lips and feet are perpetually blue.

But I lovvvvve Yukon Cornelius!

He’s an adventurer; a confident, self-made man who describes himself as the greatest prospector in the North.

I wanted to proclaim my greatness from the top of the North Pole.

And the closest I could get to the North Pole was the shelf-ice on the southern shores of Lake Michigan where we lived when I was twelve.

So the shelf-ice would have to do.

I was going on an adventure.

Taking leave of my parents who were fighting the kind of fight that would take hours to end, they would never notice my disappearing.

But it was getting late and the sun would set soon, so I needed to be quick and quiet in my getting away.

Dropping it in a heap, I slipped downstairs, into my bright red jacket, and out the basement door.

I wasn’t prepared for the wind’s hard-cold slap in the face or the stark-reality of the freezing cold air that took my breath away when I opened the door, but I kept moving.

I grabbed my mom’s walking stick.

It was stuck in some snow and leaning against the side of the house right under the kitchen window that was closed.

I could hear my parents arguing inside.

It was too windy to make out my father’s words, but it didn’t matter. He repeated variations of them often, so I felt their vibrations.

Like an electrical current, they penetrated the walls of our house and pierced my heart like a poison arrow:

“You’re a nothing, a nobody, and you’ll never amount to anything,” he’d say. Over and over and over: “You’re an abomination; you should be ashamed of yourself.”

I pulled the drawstring in the hood of my jacket even tighter under my chin and closed myself up inside.

I hopped through the snow like a rabid runaway, until I found the path in our backyard that led me to the top of the sand dunes.

And there it was.

It was covered in a sheet of ice as far as my eyes could see and it was beautiful.

Even frozen, the water gave me a sense of security and serenity that I never felt at home.

I dropped down the sand dune and headed to the top of the shelf-ice where I’d proclaim my greatness to the world; I loosened the drawstring in my hood.

I didn’t know it at the time, but the reason it’s called shelf-ice is because it’s not attached to the bottom of the lake – only to the shore – like a floating shelf.

Sturdy and solid as concrete, but it can give way with no warning at all.

So I began my trek onto the frozen water.

But the farther I trekked, the more the shelf-ice shifted, and the more scared I got.

Like the Continental Divide, the inside of my house never felt safe and sturdy but at least it was warm.

I was freezing and standing on top of Lake Michigan on a cracking, drifting, shifting shelf of ice, in a bright red winter jacket that sounded like a flag being hoisted up a pole, whenever the wind whipped up my sleeves.

I was tired of my little adventure and I was growing my animosity toward Yukon Cornelius too!

I wanted to go home, but I was afraid I wouldn’t be able to get there without falling through the ice or setting sail on a chunk of it, whichever came first.

I started to feel ashamed and angry.

My father was right. I was an abomination; “an abominable [Snowgirl] of a human being.”

At least the Abominable Snowman could bounce out of freezing cold water.

I couldn’t even move; I was too cold.

I couldn’t go home; I didn’t want too, but I wasn’t much of a rebel.

The shame of being human and alive, for taking up the space I needed just to breathe.

I always followed the rules – a strict code of conduct: honor Thy mother and father, be seen and not heard, and don’t speak until you’re spoken to, so I laid down inside the hollowed out mound of snow that looked like an ice sculpture of a frozen wave, and I waited.

For about ten seconds, maybe twelve.

Then I jumped up and screamed at the top of my lungs and ran like hell, leaping like a frog from one patch of ice to another.

In the direction of the shore.

It wasn’t a great day for proclaiming my greatness.

And my screaming was more of an ugly cry.

If anyone ever tells you that tears and snot don’t freeze, they’re lying.

So here’s to surviving those days when our hearts sink into despair, our bodies tremble in fear, and our spirits want to drift towards the edge of the horizon.

Here’s to learning that no matter how hard those days feel, other days will feel better.

Even if they get worse before they get better, the better ones come.

If it doesn’t kill you, it will make you stronger.

This too shall pass.

The ice melts and when it does, we get another chance to reclaim the security that is our birthright!